ETZI stands for Enhanced Time Zone Intelligence & is the ‘brains’ needed to make  a time token ‘smart’. The Universal Time Token is a mathematical code that represents one unique moment in time. For example, 20399J4Bkw is a universal moment in time, but it will decode into many different times (all meaning the same moment in time), depending on what time zone 20399J4BKW is decoded in. In America, Houston, 20399J4Bkw would mean Thursday 9th June, 2039 04:39 -6:00. But in London, 20399J4Bkw would mean Thursday 9th June, 2039 10:39 +00:00.  Both times mean the same moment, but are simply different time zones. Let’s not get confused with time-code fields on web pages. A time-code field on a web page is static, & represents a single time when clicked. As such, it doesn’t have to be very smart. But a Universal Time Token is dynamic, mobile & variable, & does have to be smart.

A Time Transaction is the process from when a sender composes & posts a Universal Time Link (UTL), until the time when a recipient clicks the UTL, after which it is then decoded into the recipient’s local time. So, when a UTL has been created by a sender & sent out to an audience, it is received by recipients & clicked. Clicking a UTL will then send the Time Token back to UniversalTimeLink.com for decode. This is called a Time Transaction, because the same time token that was created by the UTL server, is sent back to the UTL server again by a recipient. Let’s look below at what ETZI must do for both a sender & the recipients of a UTL.

As a UTL is typically posted on Twitter or other social media, there will usually be many recipients from different time zones who will click the Universal Time Link (UTL). When a recipient clicks a UTL, the enclosed time token is returned to the server for ETZI to decode. Unlike with the sender, ETZI doesn’t have so much work to do: So from the above outline of an Enhanced Time Transaction, simply encoding time isn’t much use to anyone. A smart background agent is needed to determine not only time zone offsets, but has to deal very specifically with the sticky issue of the DST transitional hours, mainly from the sender’s point of view. Also note that ETZI must do all the hard work at encode (sender) time. But at decode (recipient) time, all the work has been done & is packaged inside the UTL time token.

In this way, the actual token is already ‘smart’ when it reaches recipients. But it cannot be ‘smart’ enough to know which time zone will request a local time decode. So enhanced decodes the UTL time token & examines the Daylight savings rules for the time zone of the recipient for the intended moment of the time token.

Enhanced Time Zone Intelligence (ETZI) is a background agent that sits and waits to decode a Universal Time Token Protocol (UTTP) that arrives at a UTL server.  UTTP is a platform-independent & dynamic time code protocol. This means that it is not globally interpreted, but must rely on a UTTP Server for interpretation, meaning that both encoding & decoding of a time token must both happen on an ETZI time server.The actual UTTP protocol space represents firstly a 4-digit year, then 6 digits that are comprised of three groupings of base-30 values. Why did we not use hexadecimal? The reason is partly for numerical power, but more importantly to allow the storing of control-code information.

Hopefully in the future, the enhanced time protocol, just like TCPIP, will become a global standard that will have global interpretation. Ideally we are hoping for the UTTP time protocol to finally get built into all modern browsers.

A Graphical Example of ETZI

Let’s say John has read of a Time Token, 20239HP1KW ,  in a newspaper, which is the time for a large asteroid entering the Earths atmosphere. Being an important event to him, he excitedly turns 20239HP1KW into time link by sending it to: UniversalTimeLink.com/20239HP1KW . Following is what ETZI must do with 20239HP1KW: 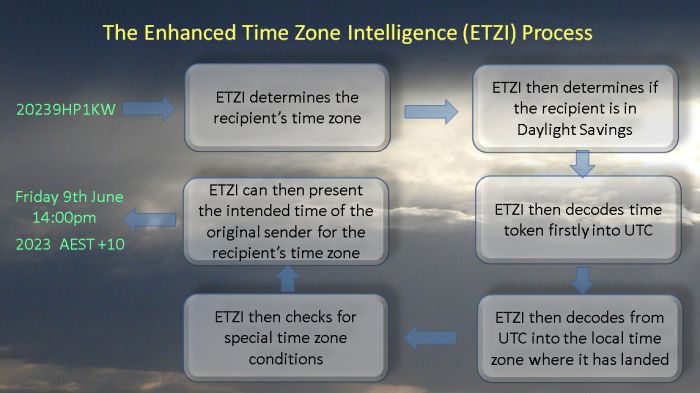 With disappointment, John must wait some time for the event, as his local time for 20239HP1KW is a long way off!