Here, we look at some examples to help explain how to use UTTP time. Posting UTTP time as a Universal Time Link to an audience is easy. UTTP Time by itself is a tokenized time code,  but when incorporated into a web link, it becomes a Universal Time Link (UTL), which turns time into a clickable internet time link. Now everyone can use time as a link. When a recipient clicks a Universal Time Link, UTTP calculates their local time on the spot, making time zone conversion truly effortless. Using UTTP Time eliminates any further need for reference to time zones, & eliminates the need for time zone conversion calculators.

Time itself as a concept has been open to many interpretations, but at the most fundamental level, time is all about an accuracy of predictability. Now, this predictability is required reliably & easily by the global audience for single time requirements. In most situations regarding international time negation, UTTP Time will hopefully become the future of World Time. Airport VDU screens, travel itineraries, military & aviation flight plans, NASA missions & web site time-stamps may well all begin using the UTTP Time standard in some form in the future, or at a time when it is firmly established with the general public. Below are some depicted scenario examples of how UTTP time can be used, particularly in the form of a Universal Time Link: 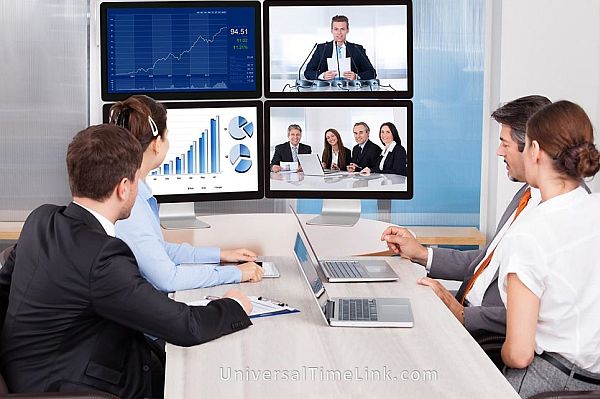 Snap Meetings need snap timing. Easy when you give everyone the same Universal Time Link. A stock market investor receives an email with a Universal Time Link (UTL) advising of a critical moment to sell shares. A traveling executive is waylaid in a departure lounge because of airport problems. He advises his staff of his new arrival time with a Universal Time Link to ensure they meet him on time A historic space walk is to be streamed & televised to the world. The time of the walk is advertised by all media as an authoritative Universal Time Link, enabling an expected 400 million viewers to easily get their own local time for the event. Surgeons at this hospital routinely receive organ donations that commonly arrive from other time zones. The timing of organ departures & arrivals is a matter of life or death, where there is no room for a time zone error. Using Universal Time Link ensures time errors cannot happen. The performance of a world class entertainer is also to be televised and streamed live. The artist’s promoter has advertised the event in all social media, television and in paper magazines using Universal Time Link, both as a courtesy also to maximize the viewing of an expected 10 million viewers.

Examples for the General Public A teenage fan receives a Universal Time Link from fan friends to advise of an online interview of their favorite singing star. A student receives a Universal Time Link invitation from ‘the guyz’ to be online at a particular time over the weekend for a gaming session. An astronomy graduate receives news of an unexpected meteor shower due to enter the atmosphere in several days. The Universal Time Link he receives ensures we won’t have the wrong time for the rare event. Anxious friends delight over the news and UTL time advising that their friend has reached the summit of Mt Everest safely. Precious moments are just that. The moment can be expressed to friends & relatives all over the world as a Universal Time Link, making it easy for everyone to know when the moment occurred, so that it has meaning to their own lives. An oil rig receives constant incoming & outgoing workers & supplies via helicopter from various time zones. It incorporates UTLs in all communications & emails. All computer logs are kept in UTTP time code so that there is no confusion with times in the event of a disaster. A petroleum refinery makes constant supplies and materials requests from overseas suppliers where delivery times cannot be in error. All orders & delivery ETA’s are furnished using UTL’s to reduce the chance of time zone miscalculation.